Citrus In The Snow: THE REPORT

He Proved The Professor Wrong 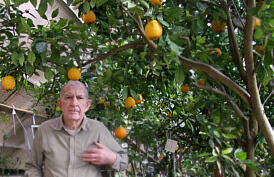 "With his Report, a geo-air system is easy to install and free to use."

Russ Finch in his greenhouse orchard

Many people have heard of Russ and his "Citrus In The Snow Greehouse" over the past several years. Very few even believed the story they heard of a "free geothermal energy greenhouse producing oranges in sub-zero weather". Most thought that if it did exist then the technology must be much more complicated than was reported. Could this incredible project be real?

There were a couple reasons his story did not make news headlines. One is that Russ is a fairly private person and did the project only for himself and not for fame, fortune or publicity. The other reason is that he and his incredible achievements were tucked away in the corner of Rural America and not very accessible to the news media.

His story of a "greenhouse in the snow" and "oranges in the snow" using "free geothermal energy" have seemed quite impossible to most, and almost a legend to others. The most fantastic part of the story is that virtually anyone could do it, and virtually anywhere in the world by simply using the normal heat stored in the ground below their home. ..."it's that simple".

Finally, after being featured in the January 2009 issue of the Nebraska Life Magazine, a 10 person delegation was assembled from the United States Department of Agriculture (USDA) and went to his legendary home and greenhouse to see for themselves.

As one would expect, they were all in complete awe that such a simple technology could actually function so efficiently in this sub-zero climate and continue to produce tropical flowers, citrus fruits and vegetables as though it were in Southern Florida or California. They were simply viewing first hand, too many things they had believed were impossible.

• Simple "Low Grade Geothermal" energy from beneath his home
• Geothermal heating with only "air" and not liquid
• No expensive "geothermal heat pumps"
• No heat exchangers
• No supplemental heating in the greenhouse for nearly two decades at sub-zero
• Premium citrus, floral, and other fruit production • Extremely low water consumption
• No system mold or fungus
• Installation costs at only a fraction of present geothermal exchange systems
• Virtually no maintenance costs for decades

His project started in 1979 when he and his wife Darlene decided to build their luxury three story, 4400 sq/ft dream home, atrium and garage yet also cut energy costs during the beautiful sub-zero winters on the Nebraska plains. Eventhough his "energy concept" was termed, "not possible" by the University professors and other professionals, Russ continued with his blind logic.

The Impossible Was Very Efficient
"The heating for the home and huge atrium was so efficient all those years", Russ said, "that in 1992 we got bold and decided to build a 16'x80' greenhouse using the same geothermal concept using air circulation". The result was his Citrus In The Snow which is now producing luscious crops of oranges, lemons, grapes and tropical flowers, ...with no heating or cooling costs

Whether you want to heat a giant greenhouse in sub-zero temperatures, or cool a home in 115° desert heat, this simple technology can do it very efficiently with only a circulation blower. This is not a "concept", it's a proven reality with more than 30 years of real life testing and fine tuning.

This is the only current, and legally authorized digital version of the Finch publication (2010-2023)
Legally valid, and approved by Russ Finch and Barry Naef in 2010, updated annually.
No other digital versions are authorized. GreenCube Research Institute granted exclusive Digital Version distribution rights.